ON THE PATH TO MASTER HERBALIST

The 2017 ACVBM Annual Conference was held on October 20th 2017 in conjunction with the AHVMA Annual Conference at the Town and Country Resort and Convention Center, 500 Hotel Circle North, San Diego CA 92108.  Our herbwalk was held on the 19th at 4 PM, and on the 20th John Chen lectured for six hours, followed by our Board meeting, then with a two hour evening session with Subhuti Dharmananda.

Dr. Ihor Basko led us on this adventure.

"I personally will be using it as a guide.  It should be especially useful for those living in the area and are thinking about using local herbs in

their practice. I am planning my herb walk to be more experiential than didactic learning so that the experience can be used in their own locale.  I would like people to take pictures of those they find interesting or "are calling to them" and spend some time with the plant...feeling, sensing, tasting, and hearing them."

How You Can Help

Some Abstracts may include information pertaining to more than one species.

Some Abstracts may include information pertaining to more than one herb 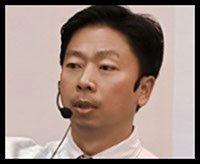 Dr. John Chen's participation in the family tradition has led him to become a recognized authority in both western pharmacology and Chinese Herbal Medicine. He has taught herbology and pharmacology at universities, including University of Southern California (School of Pharmacy) and University of California in San Francisco (School of Pharmacy) and Pacific College of Oriental Medicine in  San Diego, California. Dr. Chen has also given seminars on herb-drug interactions for regional, national and international associations and organizations. Dr. Chen is currently a member of the Herbal Medicine Committee for the American Association of Acupuncture and Oriental Medicine; he is an herbal consultant for the California State Oriental Medical Association and is on the review/editorial committee for American Herbal Pharmacopoeia, the University of Arizona Integrative Medicine Program, and the American Academy of Medical Acupuncture. Dr. Chen has published numerous articles and several books. His most recently published works are Chinese Medical Herbology and Pharmacology (2003, AOM Press) and Chinese Herbal Formulas and Applications (2008, AOM Press) for which he was lead author.

Dr. John Chen is a recognized authority on Chinese herbal medicine and western pharmacology. Holding doctoral degrees from both USC School of Pharmacy and South Baylo University, he currently teaches at USC and numerous universities of traditional Chinese medicine. Dr. Chen actively participates in education and research, and lectures widely at conferences at local, state, national, and international levels. He also appeared in the Discovery Channel six-hour documentary on complementary and alternative medicine in 1999. Dr. Chen is the author of three textbooks: Chinese Medical Herbology and Pharmacology, Chinese Herbal Formulas and Applications, and Chinese Herbal Formulas for Veterinarians.

Dr. John K. Chen received Doctor of Pharmacy (Pharm.D.) from the University of Southern California School of Pharmacy and Doctor of Oriental Medicine (O.M.D.) from South Baylo University of Oriental Medicine. Upon graduation, he received additional post-graduate training in herbology and internal medicine in Beijing, China. Academically, he is an adjunct professor at University of Southern California (USC), University of California Irvine (UCI), and numerous colleges/universities of traditional Chinese medicine. Professionally, he is the author of Chinese Medical Herbology and Pharmacology and Chinese Herbal Formulas and Applications. He is also an editorial board member for Medical Acupuncture by American Academy of Medical Acupuncture (AAMA) and American Acupuncturist by American Association of Acupuncture and Oriental Medicine (AAAOM). Furthermore, he frequently educates the public on the benefits of traditional Chinese medicine in media such as Festival of Health hosted by Los Angeles Times, and Complimentary and Alternative Medicine documentary filmed by the Discovery Channel. Dr. Chen resides in Southern California, where he medical consultant of Evergreen Herbs and chief author of Art of Medicine Press.

Dr. John Chen is a recognized authority on western pharmacology and Chinese herbal medicine.  He graduated from the University of Southern California (USC) School of Pharmacy and South Baylo University of Oriental Medicine.  He also received extensive post-graduate training in China specializing in herbology and internal medicine.  Academically, he is an assistant professor at USC School of Pharmacy, Yo San University, Emperor’s College, and Los Angeles Chiropractic College.  Professionally, he is the member of the Herbal Medicine Committee for the American Association of Oriental Medicine (AAOM) and an herbal consultant for the California State Oriental Medicine Association (CSOMA).  Furthermore, Dr. Chen has written many books, published numerous articles, and given countless seminars at universities, state organizations and national associations.  In 1998, he was invited by USC as a guest speaker at the Bergen Brunswig annual convention where more than 400 pharmacists and medical doctors attended.  In 1999, he was interview by the Discovery Channel as the expert in traditional Chinese medicine, which will be aired as part of a six-hour documentary on alternative and complementary medicine.  Also in 1999, he was selected by the Los Angeles Times as a member of the Festival Honorary Committee member and the speaker for Herbal Medicine at the First Annual Festival of Health.  In 2000, he was appointed as the academic advisor for Integrative Medicine Program at University of Arizona.  He was also selected in 2000 as a member of the editorial board for Medical Acupuncture, a peer-reviewed journal published by the American Academy of Medical Acupuncture (AAMA).  In 2004, he was awarded as the Author of the Year by AAOM for his publication of Chinese Medical Herbology and Pharmacology. He is currently the President of Art of Medicine Press, and a consultant of Evergreen Herbs. 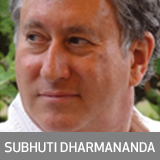 Subhuti Dharmananda established the Institute for Traditional Medicine and Preventive Health Care (ITM) in 1979 to promote education, research, and charitable works in the field of traditional medicine systems, for which Chinese medicine became the primary area of concern.  The Institute has two clinics, An Hao Natural Health Care as a model of integrative methods and Immune Enhancement Project (IEP) Clinic to provide low cost acupuncture and Chinese herbs for difficult diseases in support of standard medical methods.   He comes from a science background (Ph.D. in Biology) and is not directly involved in delivering the health care services, but helps organize the clinical format and, for many of the IEP participants, provides the clinical outline for attaining therapeutic goals and offers details of the treatment protocols, having had prior experience, primarily as an herb prescriber, in treating patients.  As a result of reviewing several types of literature, Subhuti  has produced articles on subjects of traditional medicine concepts, herbs, formulas, diagnosis and treatment of specific diseases, and safety issues, which are posted on the ITM website.

All content © the American College of Veterinary Botanical Medicine (ACVBM) 2023

The ACVBM is not affiliated with the Veterinary Botanical Medicine Association (VBMA).